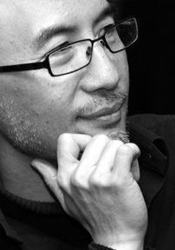 Aries Cheung studied design and illustration at the Hong Kong Polytechnics University, and graduated in Visual Arts at York University. He has worked as a visual artist, graphic designer and art director for advertising for many years.

Cheung is now an independent, practicing visual artist and teacher. His interests include painting, drawing, digital imaging and photo-based, mixed media work. He has exhibited at galleries locally and abroad. He has been on the jury and programming committees for artist-run galleries in Toronto, such as A Space Gallery. He has received Ontario Arts Council Artist’s Grant and has been a Toronto Arts Council Artist’s Grant Jury Member.

Cheung’s works often deal with racial identity and sexuality, using portraits, figures, or the human body as the basis for contention. He often uses personal issues as references to explore politics that affect his communities. Cheung often collaborates with dance and theatre companies on multi-media projects. In 2008, he produced mutli-screen video projections as well as performed as a dancer and actor for the integrated mutli-media theatre, Salt Fish Girl 1 - Hope & Forgetfulness. In 2010, he created video projections and installations for Hiding Words (For You), the second multi-disciplinary theatre production with the collective, Eventual Ashes.Cheung has been facilitating and coordinating community arts projects for various organizations, such as Asian Community AIDS Services. He is now working on short and feature film projects.

More of Cheung's work can be found on his website here.

2010: Hiding Words for You. Taking on the theme of Nushu, a secret language developed by women in ancient China, Hiding Words for You is a multi-media theatre production which tells the story of how several women from different centuries reconnect across time and space.

2008: Plant Series. While subtly addressing environmental issues, Plant Series' central theme remains that of the hybrid between human and plant in all its emotional and power complexities. Plant Series also speaks of the beauty, hope, and resilience to surreal and grotesque creatures.

This article based on content from {{{1}}}.
Retrieved from "https://www.asiancanadianwiki.org/mw/index.php?title=Aries_Cheung&oldid=16099"
Categories: