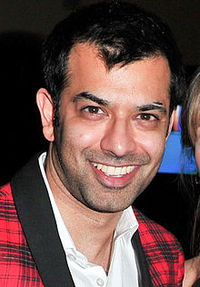 Zaib Shaikh is a Canadian actor, writer and director. He is best known for his current roles as Amaar Rashid, an imam in the CBC Television sitcom Little Mosque on the Prairie, and Jayesh in Metropia, an evening soap opera broadcast on Omni Television.

As well as Metropia and Little Mosque on the Prairie, Shaikh appeared as Vancouver city councillor Shakil Khan in Da Vinci's City Hall. He is co-founder of the Whistler Theatre Project, and also writer and director of the CBC adaptation of Othello. He will appear as Nadir Khan in Winds of Change, Deepa Mehta's adaptation of Midnight's Children.

He is married to Canadian Broadcasting Corporation executive Kirstine Stewart.