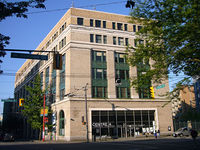 Situated in the heart of Vancouver's downtown Eastside, Centre A is a gallery that houses contemporary Asian art in the hopes of engaging, educating, and stimulating critical thought and debate. However, Centre A acts as more than just an art exhibit, it goes beyond the standard convention to include "artists-in-residence, collective interventions, works in progress, studio production, public forums, screenings, publications and web projects". Established in 1999, Centre A has bosted the work of over 300 artists from Canada and abroad, as well as having produced over 80 original projects.

- Fire/Fire by Marina Roy and Abbas Akhavan and is on exhibition from June 2 to August 4, 2012. "Fire/Fire calls out like a warning, of obvious danger, perhaps too late. The title derived from the Great Fire of Meireki, which destroyed more than half of the Japanese capital city of Edo, leading to the redistribution of power and the establishment of the Edo period that gave birth to the tradition of Ukiyo-e prints in Japan. It also refers to the Great Vancouver Fire of 1886, which razed most of the newly incorporated city, and more recently the building fires that expelled artists from their studios, paving the way for new real estate and condo development. Fires are testament to our inability to control nature."

- THERE ARE NO PROBLEMS IN ART by Young-hae Chang Heavy Industries; held from September 13 to October 21, 2011.

[edit] Board of Directors

This article based on content from http://centrea.org/.
Retrieved from "https://www.asiancanadianwiki.org/mw/index.php?title=Vancouver_International_Centre_for_Contemporary_Asian_Art&oldid=13883"
Categories: