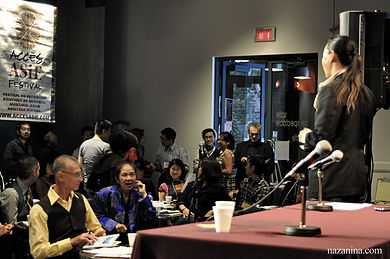 [edit] Canada Council of the Arts

The National Symposium was made possible by Canada Council of the Arts in 2010.

[edit] History of Asian Heritage Month in the United States

Asian Pacific American Heritage Month (APAHM) is celebrated in May to commemorate the contributions of people of Asian and Pacific Islander descent in the United States. Congress passed a joint Congressional Resolution in 1978 to commemorate Asian American Heritage Week during the first week of May. This date was chosen because two important anniversaries occurred during this time: the arrival of the first Japanese immigrants in America on May 7, 1843 and the completion of the transcontinental railroad (by many Chinese laborers) on May 10, 1869. In 1990 Congress voted to expand it from a week to a month long celebration and in May 1992, the month of May was permanently designated as “Asian/Pacific American Heritage Month.”

2001: Senator Vivienne Poy declared the month of May as Asian Heritage Month in the Senate.

2003: A four-day meeting occurs between Montreal Asian Heritage Festival with the Vancouver Asian Heritage Month group. This exchange meeting was supported by Canada Council through its Outreach section and included William Lau as a representative from Toronto’s Little Pear Garden Collective.

2006: A teleconference call was organized by Senator Poy and with Asian Heritage Month groups across Canada consisting of representatives from Montréal, Toronto, Winnipeg, Vancouver, Halifax and Ottawa.

Accès Asie (aka Montreal Asian Heritage Festival) is hosting a national Asian Heritage Month(AHM) symposium for Fri., Sat. Sun. Sept. 17, 18, 19, 2010 in Montreal. Building into, during and after the symposium in a participatory national momentum towards an network, Accès Asie is spearheading an Asian Canadian wiki, www.asiancanadianwiki.org. Documents, notes and comments, of the symposium will be available on the wiki for all to access and to add.

Accès Asie has identified a need to connect Asian Canadian cultural communities and artists who may be working in isolation, in order to encourage cross-regional, cross-provincial and cross-community exchanges such as resource sharing, collaborative strategies, touring possibilities, funding options etc.

The symposium will offer discussion and coaching activities led by speakers who are known for their leadership in the respective areas of cultural strategy, fundraising strategies and diversity-equity policy implementation.

The Asian Canadian wiki is to develop the connections and shared information from the symposium, facilitate communication and cultivate a democratic, information sharing connection with Asian Heritage month organizations, cultural communities and artists increasing the profile and visibility of Asian Canadians across Canada.

[edit] Key Themes from the Symposium

Where do we go from here, how do we look at successes and challenges?

- Board members - Join forces with similar organizations (ideally they have more money!) - Government consultation, networking with the government (through workshops) - Not a competition, use similar organizations as a strength and borrow from their resources - Social media (FB, Twitter) - Look for supportive politicians - Use your website well - Newspaper support - Interacting with mainstream organizations in your community – make the event appealing to all - Support a charity to raise the profile of the organization - Participate in fundraising events of other groups to gain them as allies - In-kind support - Understand your mission statement and make sure other knows what you stand for - Be active in schools to gain youth support - Partnerships with other organizations - Talking to your government funding agents when you’ve been accepted or rejected to network and to find out what worked/didn’t work - Author visits in May - Try to integrate workshops/information into the school system (similar to Black History Month) - Crowd-sourcing - Asking your target group what they want and have them determine what you should organize. Ensuring that Asian Heritage month is relevant to the community rather than run by a board of directors - Educating the older generations – what are the new challenges, needs and wants of the community and conveying how they’ve changed and how they can play a role in planning Asian History month - Contacting immigrant organizations – to get them on-board with the community as soon as possible - Increase PR with immigrant centres - Ties into HR options

- How do we get the media’s attention? - How do we populate our events? Actions - Teleconference (6-10 hours aiming target – May 2011) - Corporate or academic networks to reduce teleconference costs - Telus specifically would be a good option - Research where resources are available - Each city can option to bring in artists to perform - Communicating with students interested in East Asian culture (e.g. East Asian studies programs) - Apply for commemorative stamp with Canada Post – Senator Poy to write a letter to CP – for the 15th anniversary of AHM - Co-sponsor events with other organizations - Newcomer contributions spark media interest - Appeal to the universal story – the media doesn’t want an event...they want a story - Give the media something to talk about other than just selling an event - Know how to properly pitch to the media - Invite journalists as an MC - Make use of the ethnic press - Make a strong press kit, follow up with it - Make sure your press kit is supportive of the language of the newspaper (Chinese, Korean, etc.) - Know your local media and who covers similar stories - Know your free paper - Build a strong network – use your social network resources - Collect population data – survey - Youtube, Facebook, Ping.fm, online resources - Utilize the newsletter of different organizations – church bulletins - Make sure your partners use their networks as well, make sure you partner with larger organizations that have large mailing lists! - Line-up with festival organizations - Stop doing your own marketing – get a marketing professional on your board! You don’t know what you’re doing - Get young people onto your boards - Change the inside to change the outside - Founders syndrome is rampant in our community - Contact your work-email. Know the networking groups available to you! How about the work e-mails of the board members Public libraries - Free newspaper listings for PSAs - Get onto events calendars and kiosks Who does what, when? - Letter of concern to CIC – representing everyone in the Asian Heritage community - Presents more obstacles than before - Who is willing to participate in drafting the letter - Madivh Verna - Carol - Nathan White - Robert Yip - How do we want to distribute the letter? - One letter signed by all various organizations - Put forward practical solutions – clarification around basic questions that were left unanswered - Critique the process, not the individual - Find support from other organizations (like Black History groups) - Needs to be sent out to all the groups for editing - Due September 30th