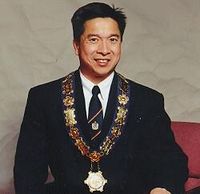 He is one of only a handful of mayors of Victoria who were actually born and raised in the city, and was the city's first mayor of Asian heritage to be elected. At 38 years old he was also one of the youngest candidates ever to win Victoria's mayoral election.

In 1999 Alan Lowe managed to win a hard fought three way race versus Bob Friedland of the Victoria Civic Electors on the left and veteran right wing councilor Geoff Young. His campaign slogan was "Aim High, Vote Lowe", which highlighted his sense of humor and charm.

The accepted opinion in the next election was that Lowe was unassailable and therefore no serious candidates chose to challenge him. He handily won the 2002 election (61.65% of the popular vote) against a number of opponents, including his closest contender, Ben Isitt, then a 24-year-old master's student at the University of Victoria.

Alan Lowe won re-election in the 2005 elections. He again faced Ben Isitt and defeated him by 1,400 votes. Lowe's completion of the new police headquarters building and the Save On Foods Memorial Centre were very positive for his public relations. The arena project was not finished under the tenure of his predecessor mayor.

In the December 5, 2007 edition of the Victoria Times Colonist newspaper, Lowe stated that he would like to spend more time with his family, friends, other interests and would not seek re-election. He served on Victoria City Council for 15 years as a Councilor and Mayor.