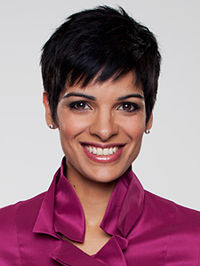 Her parents immigrated to Canada from her native Sri Lanka when she was just a child. They settled in southern Alberta and she started her television career in Lethbridge in 1993. Six years later she moved to Toronto where she was a reporter for CTV. While at CTV, she co-hosted the award-winning 21©, a current-affairs program aimed at Canada's younger generation, and reported for Canada AM and CTV National News.

Mediwake's father is Sri Lankan while her mother is of Scottish origin. She is married to Darryl Konynenbelt, who is also a journalist and together they have triplets Annabel Abeyesinghe, Maxim Bandara and Libby Abeyesinghe who were born in 2007. An ongoing series on the pregnancy and the births was carried in the National Post.