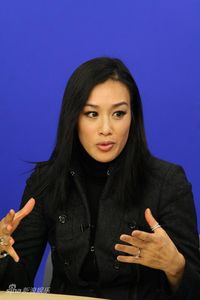 Christy Chung is Chinese-Canadian actress. She was born in Montreal to a Chinese father and a Vietnamese mother.

Chung grew up in Brossard, Quebec, a suburb of Montreal, with French and Vietnamese as mother-tongues. She later learned English, Mandarin and Cantonese.

While studying for a career in the tourism industry at the Université du Québec à Montréal (UQAM), she entered and won the "Miss Chinese Montreal" contest in 1992. She then went to Hong Kong, in her first trip away from home, to participate in the Miss Chinese International Pageant 1993, in which she won despite not knowing a single Chinese word. This opened doors for her to launch her acting career there, despite not speaking a word of Cantonese at the time, and despite her extremely limited acting experience (an uncredited ten-second non-speaking role as a gum-chewing prostitute in Denys Arcand's Love and Human Remains). She had to choose between acting in Hong Kong and becoming the weather-forecast presenter at Société Radio-Canada, the French-language government television network in Canada.

A role in The Bride with White Hair 2 brought her instant recognition, and she became a well-known star in Chinese-language popular culture, acting in a large number of films including some films starring Stephen Chow, as well as The Bodyguard from Beijing starring Jet Li. She was married for a time to Glen Ross, and gave birth to daughter (Yasmine) in Montreal in the middle of the 1998 Ice Storm. Chung and Ross were divorced in 2002, but remain on good terms. Chung has sole custody of Yasmine.

Giving birth to Yasmine temporarily had a negative effect on her career because of a stereotypical impression that a mother could not function as a sex symbol, but her career recovered in 2000. More recently, she had roles in Samsara and Jackie Chan's movie The Medallion. She added Thai to her language repertoire when she starred in Nonzee Nimibutr's 2001 film Jan Dara. Singapore FHM magazine voted her the "Sexiest Woman in Asia" in 2000.

She is a brand ambassador and spokeswoman to slimming service Marie France Bodyline, prominently appearing on billboards and print ads, and is also known to be a fan of English football club Chelsea.

Despite her success, she remains mostly unknown in Quebec, where she was born and grew up, because she has done most of her film work in Cantonese.

Chung was recently seen at the 2007 Sina Awards and is currently working on an album.

She has also since retired from showbiz, and has been living in Beijing. Chung is now a restaurant owner. She recently starred in Bruce Lee, My Brother playing the role of Bruce Lee's mother and Aarif Lee portrayed Lee.