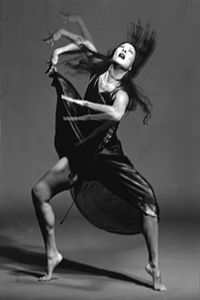 Renowned for her electric stage presence, her passionate, sensuous and highly stylized works are inspired by the richness of her intercultural and metaphysical explorations. These explorations include research into her own Japanese Canadian heritage, as well as the fiery explosive dynamics of Flamenco dance forms. She is drawn by the mysteries of the human spirit and is inspired by ancient mystical traditions, mythological archetypes and religions.

Her works have been presented in The Schwankhalle in Germany, the Duncan Center (Prague) in The Czech Republic, TanzIist! in Austria, The Festival Fringe Tomar’99 and 2000 in Portugal, at Tangente and in the OFF-FIND (Festival International de Nouvelle Danse) in Montreal, Festival Off d’Avignon, Festival International de Musicas Visuales in Mexico City, The Town Hall in Sheffield, Vermont, at many venues in New-York City, including PS122, The Joyce Soho and The Mulberry Street Theater and at Harbourfront in Toronto.

She enjoys the process of collaboration with composers, musicians and visual artists and is the artistic director of her company Mariko Tanabe Danse in Montreal. She has a weekly radio dance chronicle on Radio Ville Marie. MARIKO TANABE ’s background includes work in traditional Japanese dance forms including Kabuki and Noh. She has also trained in Butoh, Flamenco, Middle Eastern Dance, experimental theatre, Alexander technique, yoga and the healing arts.

For twelve years she worked with American Modern Dance pioneer Erick Hawkins with whom she was a principal dancer, teacher and associate rehearsal director. As a guest artist she has taught at several Universities and Art Centres throughout the world including Tanzwerk in Bremen, Germany, the Duncan Centre Conservatory in Prague, the National Film Academy in Prague, the University of Nevada at Las Vegas, the Kennedy Centre in Washington, D.C., BellasArtes in Mexico City and the Musik Akademy in Dornbirn,Austria.

Her work "Narcisse en Silence" is in the permanent archives of the German Tanzfilm Institute in Bremen. In 1996 she was Assistant to the Artistic Director and Rehearsal Director or Compagnie Marie Chouinard in Montreal. She is the recipient of awards by the NAJC Endowment Fund, the Canada Council for the Arts, the Conseil des arts et des lettres du Québec, La Ville de Montreal, The Ministry of Culture and Communications of Québec. The Canadian Commission for UNESCO and The Laidlaw Foundation for her choreography.