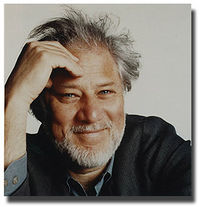 Michael Ondaatje is is a Sri Lankan-born Canadian novelist. He won the Booker Prize for his novel The English Patient, which was adapted into an Academy Award-winning film.

Ondaatje was born in Colombo, Sri Lanka (then Ceylon) in 1943 and moved to England in 1954. He attended Dulwich College. After relocating to Canada in 1962, Ondaatje became a Canadian citizen. He studied for a time at Bishop's College School and Bishop's University in Lennoxville, Quebec, but moved to Toronto, where he received his BA from the University of Toronto and his MA from Queen's University, Kingston, Ontario. He then began teaching at the University of Western Ontario in London. In 1970, he settled in Toronto and, from 1971 to 1990, taught English literature at York University and Glendon College.

Ondaatje's work includes fiction, autobiography, poetry and film. He has published 13 books of poetry, and won the Governor General's Award for The Collected Works of Billy the Kid (1970) and There's a Trick With a Knife I'm Learning to Do: Poems 1973-1978 (1979). Anil's Ghost was the winner of the 2000 Giller Prize, the Prix Médicis, the Kiriyama Pacific Rim Book Prize, the 2001 Irish Times International Fiction Prize and Canada's Governor General's Award. The English Patient won the Booker Prize, the Canada Australia Prize, and the Governor General's Award and was later made into a motion picture, which won the Academy Award for Best Picture. In the Skin of a Lion, a fictional story about early immigrant settlers in Toronto, was the winner of the 1988 City of Toronto Book Award, finalist for the 1987 Ritz Paris Hemingway Award for best novel of the year in English, and winner of the first Canada Reads competition in 2002. Coming Through Slaughter, is a fictional story of New Orleans, Louisiana circa 1900 loosely based on the lives of jazz pioneer Buddy Bolden and photographer E. J. Bellocq. It was the winner of the 1976 Books in Canada First Novel Award. Divisadero won the 2007 Governor General's Award. Running in the Family (1982) is a semi-fictional memoir of his Sri Lankan childhood.