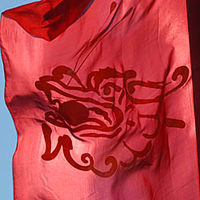 Dragon Boat is an international water-sporting and cultural event that commemorates the death of Qu Yuan, a beloved Chinese patriot and poet who in 278 B.C. committed suicide in the Miluo River, thus expressing his discontent against one emperor of the Zhou dynasty. Out of sadness, the villagers paddled out in fishing boats to save his soul, beating gongs and drums to frighten away evil ghosts. Since that day, dragon boat festivals honour the great poet's virtue and patriotism. Dragon boat races are now among the world's fastest growing sports.

[edit] What goes on at the Dragon Boat Race Festival?

Teams from around the world and from around Montreal compete in 250 metre and 500 metre races. Live entertainment: Folk dancing and music groups from various cultural communities, children's drawing contests, and ethnic delicacies are available throughout the festivities and sponsors exhibit various products and services.

The Dragon Boat Festival falls on the fifth day of the fifth month of the Chinese Lunar calendar. Chinese people celebrate this day by wrapping rice dumplings in bamboo leaves and holding Dragon Boat races. The celebration of this festival is a tradition that has lasted two thousand two hundred and ninety-three years, to commemorate the great poet Qu Yuan (343-290 B.C.)

Qu Yuan lived during the Warring States Period. He was a minister of the Ch'u State, which was among the seven strong nations. After the Ch'u State became a major power, the Ch'u leader, King Huai indulged in women and alcohol. Qu Yuan tirelessly tried to persuade King Huai to amend his course and this offended the corrupt King. Qu Yuan was sent into exile to the North shore of the Han River. Tormented by his worries about the future of his country, he wrote the everlasting epic "Li Shao" - meaning "Sorrows, away from the fatherland", in the hopes of bringing King Huai to his senses.

In the meantime, under ill advice, King Huai was tricked into attending a summit meeting with the King of Chin in Chin's territory. He was detained and died in captivity. Subsequently, the Chin army defeated the Ch'u army and occupied one third of the Ch'u territory. After the son of Huai became King, he re-appointed Qu Yuan to a prominent position. Qu Yuan succeeded in convincing the Chin and Chao states to form a united front and defeated Chin, thus reclaiming all the lost land. When the new king saw that his kingdom was again strong and secure, he also indulged in women and alcohol, and was under bad influence of corrupt advisors. Once again, Qu Yuan was banished into exile, to the Miluo River community in Huan. There he wrote "Ask Heaven", "Nine Songs" and other patriotic poems. The King remained unrelenting, Chin again attacked Ch'u and occupied half of its territory, including its capital.

Qu Yuan was heartbroken. He jumped into the Miluo River on the fifth of May to commit suicide, hoping to awaken the people of Ch'u with his death and become concerned about their own futures. The people in the River community went in their boats and combed the Miluo River, hoping to save Qu Yuan. Unfortunately, their efforts were fruitless. The people, saddened by the loss of a wise, conscientious and courageous poet, burned incense and threw sacrificial food (meat and rice), packed into bamboo trunks, into the river. Thereafter, every fifth day of the fifth month, the people of this river community commemorated this day by holding boat races on the Miluo River to remind themselves and their children and grandchildren of the teachings of Qu Yuan to be united and to protect their country.

In the one hundred years or so following this event, the boat used in the boat races evolved into highly decorated dragon boats and the food-packed bamboo trunks were replaced by glutinous rice wrapped in bamboo leaves, in sweet and salty flavors. The celebration of dragon boat races and bamboo rice dumplings spread throughout China and became one of the most popular folk festivals. Today, it is celebrated throughout the world in all Chinese communities.

Dragon boat racing has been practiced in China by around 20 million people. But over the past 25 years it has spread beyond Asia to Europe, North America, Australia and Africa, to become an international sport with a huge following. Nowadays it is among the fastest growing water sports and remains amazingly the largest team sport, with over 60 million participants in over 50 countries. The biggest dragon boat festival racing events outside of Asia are in Canada. Vancouver, Toronto and Montreal each host races featuring more than 180 25-person crews. These races take place over two days in mid-to-late June or July trying to correspondent with the 5th Day of the 5th Month custom. As co-operation plays an important role in successful dragon boat racing crews, Dragon Boat Racing has also become a very popular corporate and charitable sport, during which friendship, strength and endurance are developed among the participants.