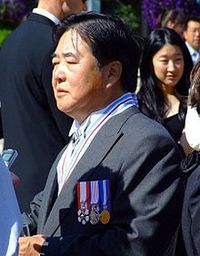 The Honourable Philip S. Lee and Her Honour Anita K. Lee, Canada Day 2010, Winnipeg, ManitobaBorn and raised in Hong Kong, Lee migrated to Canada in 1962 to study in the University of Manitoba. He graduated with a Bachelor of Science in 1966 and a public administration diploma in 1977. In 1967 he was hired by the City of Winnipeg as a research chemist. He helped organize the Chinese pavilion in the first Folklorama in 1970 and later became Vice President of the Folk Arts Council of Winnipeg. In the 1977 Manitoba general election, Lee ran as a Progressive Conservative candidate in Winnipeg Centre where he lost to Bud Boyce of the Manitoba New Democratic Party. Lee was on Winnipeg's Refugee Assistance Committee from 1979 to 1986. He also advocated the construction of the Winnipeg Chinese Cultural and Community Centre in the Dynasty Building, the Chinese Gate and Garden, and the Mandarin Building in Winnipeg.

His appointment as lieutenant governor was made by Governor General Michaëlle Jean, on the advise of Prime Minister, Stephen Harper, on June 19, 2009. Upon assuming the office on August 4, 2009, Lee became the 24th Lieutenant Governor of the province.