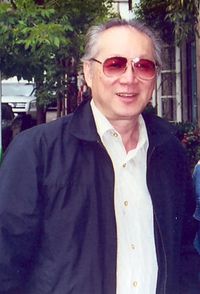 An accomplished scholar, teacher, academic leader, filmmaker, television journalist, and writer, Anthony B. Chan's last academic position was Professor and Associate Dean of Communication in the Faculty of Education at the University of Ontario Institute of Technology, Oshawa, Ontario. [1]

Chan is currently co-authoring a new book about the lives of Chinese Canadians in Victoria and Vancouver from 1931 to 1932. This is based on his parent's letters and primary archival sources. In this manuscript, he recounts the notion of arranged marriages, the economics of managing a cafe catering to a predominantly European clientele, 1930s fashion, greeting cards communication and a swing band among Chinese Canadians, interracial relations and the murder of Mary Shaw, and the social impact of the Depression among the Chinese in Victoria and Vancouver, among other topics. He is also working on a sequel to his Gold Mountain with a special chapter on the criminalizing of the Chinese in the Canadian/western media.

He continues to serve as a Consulting Editor on the Editorial Board of Asian Affairs: An American Journal (Washington, D.C.). [2]

His latest publication (2013) is a review essay of 3 recently published works on Chinese Canada: Arlene Chan on the Chinese in Toronto, May Q. Wong on a Chinese family in Montreal and David Wong's path breaking graphic novel on the Chinese in North America. [3]

Born and raised in Victoria, B.C., Professor Chan returned to Canada after serving as the Chair of the B.A. and M.A. degree programs in Canadian Studies and Director of the Canadian Studies Center in the Henry M. Jackson School of International Studies and as an Associate Professor of Communication and Head of Broadcast Journalism at the University of Washington, Seattle, WA. Previously, he was an Associate Professor of Mass Communication at California State University, Hayward. As an adjunct/sessional, he has also taught at the University of Victoria, University of Alberta, Saint Mary's University and Ferris State College in Big Rapids, Michigan.

His family has been in Canada continuously since 1893 when his grandfather, Chan Dun settled in Victoria, B.C.

His first historical biography analyzed the magical life and relentless business pursuits of Li Ka-shing, the most famous Hong Kong deal maker and one of the richest people in Asia. Li Ka-shing: Hong Kong Elusive Billionaire [4] was published by Oxford University Press and MacMillan(1996).

See Anna May Wong's memoir and last will and testament:

For chapter samples of Chan's biography of Anna May Wong, see:

In the book, he brought forth one of the most contentious issues in Chinese Canada. (Were the Chinese "sojourners" or immigrants? Reprinted as "Orientalism" and Image Making: The Sojourner in Canadian History in the now defunct Journal of Ethnic Studies, Volume 9, Number 3 (Fall) 1981, 37-46).

In 2008, Tony Chan published the innovative Dao of Communication [22], which he co-wrote with Nancy Van Leuven.

He is co-editor of People to People: An Introduction to Communications. Currently, he is writing a book length manuscript on immigrant nationalism in Chinese Canada where he is focused on examining the impact of such social network systems as Facebook on family bonds and the pervasiveness of cyber crime on this ethnic nation in Canada.

His articles can be found in Asian Affairs, Cinemaya, Gazette, Journal of European Economic History, Journal of Ethnic Studies, Ethnic and Racial Studies, Canadian Ethnic Studies, Adult Education, Asian Profile, and Army Journal and Defence Quarterly, among others. Professor Chan was the founding editor of: New Scholars - New Visions in Canadian Studies (Seattle). [23] and co-founder of The Asianadian: An Asian Canadian Magazine (Toronto). [24][25] [26]

In 1979, Tony Chan was the Halifax, Nova Scotia delegate in the ad hoc committee against CTV's W5 "Campus Giveway." He was also a founding member of the Chinese Canadian National Council (CCNC). See his essay on this important Canadian civil rights movement: 30th September 1979 30th Anniversary of Chinese Canadian Activism. [27]

In 2007, Chan returned to Toronto after wandering the earth for 25 years in Asia, the US, and Europe. His quest for enlightenment brought him home.

As a filmmaker, Chan’s independent films include a four part series on Asian Americans and Vietnam. The series was purchased by Ken Burns for his 2016 series on Vietnam [28].

Chan has also produced films focusing on work, culture and survival in North America. Some examples:

He has worked as a television reporter for the CBC in Edmonton, Saskatoon, and Calgary (1983-1986). At CBC Regina, he hosted and narrated several episodes of The Canadians.

Across the Fine Line (mental health in HK)

A Passion for China (Rare footage of pre-1949 China)