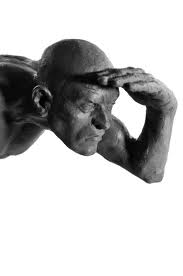 Drawing, painting and sculpting are the vehicles with which Alan Sakhavarz weaves his imagination into an art form. The common thread throughout his diverse creations is his quest for understanding the human condition and the world we live in. At times these thoughts are reflected in satirical narratives in cartoons and some times they manifest in lyrical manipulations of the human form. The latter convey subtle nuances of fleeting moments in life.

Sakhavarz is an Iranian born, self –taught artist who has worked in the tense environment of editorial rooms in Tehran and has experienced at first hand the devastating effects of political turmoil, revolution and social upheavals as an editorial cartoonist. For the past three decades that he has lived in Canada, he has also established himself as an accomplished painter and sculptor. This background has always been a constant influence in shaping the foundation of his work, hence, providing him with a unique ability to give shape to sometimes unspeakable ideas. Currently based in Toronto, Alan Sakhavarz’s has works housed in both private and corporate collections across North America and has exhibited in numerous museums and galleries across Canada and the United States. A number of such exhibitions include: Royal Ontario Museum, Toronto, The Canadian Museum of Nature in Ottawa, and The Leigh Yawkey Art Museum in Wisconsin. He is a signature member of the Society of animal artists and the Oil painters of America.