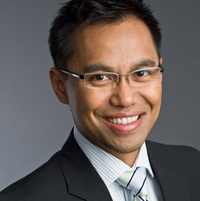 Alden E. Habacon is the Manager of Diversity Initiatives for the English Television Network (CBC Television) of Canadian Broadcasting Corporation/Radio-Canada, where he designs and manages the implementation of initiatives that support CBC's commitment to accurately reflect Canada's diversity in programming and hiring. He is also the founder of Schema Magazine, an online magazine whose mandate is to reflect the most culturally mobile and complexly diverse generation of Canadians ever observed.

He has shared his perspectives on "Multiculturalism 2.0" and the Cultural Navigator phenomena to numerous agencies, such as Canadian Heritage and Citizenship and Immigration Canada (CIC). Alden has been a featured speaker at diversity conferences and symposiums in Canada and abroad, including the prestigious Couchiching Institute of Public Affairs (CIPA) Summer Conference, Metropolis (Canadian Heritage), and the Seminar on Cultural Diversity and Broadcasting co-hosted by the Asia-Pacific Institute of Broadcaster Development (AIBD) and the Canadian High Commission in Malaysia, which included a workshop in Manila, Philippines at ABS-CBN.

His recent speaking engagements include the 2008 Discrimination Prevention Forum, the 2008 ASEAN-Canada Dialogue on Interfaith Initiatives in Surabaya, Indonesia, co-hosted by the Department of Foreign Affairs and International Trade, and a special presentation organised by the Commonwealth Broadcasting Association (CBA) and the International Broadcasters Trust (IBT) in the Parliament Building in London, England.

Alden is informed by his Filipino ancestry but not defined by it. As a definitive Cultural Navigator, he was born in Manila and spent much of his childhood living across Western Canada. Alden graduated from Simon Fraser University with a BFA in Visual Arts. He currently lives in Vancouver, British Columbia with his wife.

This article based on content from http://www.schemamag.ca/alden/2006/04/alden_e_habacon_bio.php.
Retrieved from "https://www.asiancanadianwiki.org/mw/index.php?title=Alden_E._Habacon&oldid=13499"
Categories: