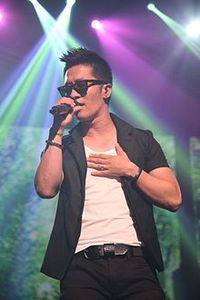 Having immigrated to Canada with his family, Alex rose to fame upon returning to South Korea years later as part of the group Clazziquai. The group's popularity skyrocketed after featuring on the soundtrack of hit drama series My Lovely Samsoon.

In 2008, the group announced a temporary hiatus, and its members debuted as solo artists, including Alex. In 2009, Clazziquai returned with the release of Mucho Punk.

Alex Chu became part of MBC reality show We Got Married (우리 결혼했어요) and was matched with Korean trot singer Jang Yoon Jeong in the Lunar Special episode, and actress/model Shin Ae for the rest of the series. The show also stars Crown J, Andy of Shinhwa, Seo In Young of Jewelry, Solbi of Typhoon, Saori and Jung Hyung Don. Alex and Shin Ae left the show after Episode 8 for Alex to record his first solo album Vintage Romance. They were replaced by Kim Hyun Joong of SS501 and Hwangbo of Chakra. However, due to popular demand, the couple reunited in Episode 13. Alex and Shin Ae made their exit from the show on November 16, 2008.

On June 1, 2012, Alex opened a new Italian restaurant, D'asti Plate. He partnered with three of his close friends to open the restaurant, which is located in the Shinsadong area of Seoul.

This article based on content from http://www.wikipedia.org. Original version: url http://en.wikipedia.org/wiki/Alex_Chu
Retrieved from "https://www.asiancanadianwiki.org/mw/index.php?title=Alex_chu&oldid=13506"
Categories: