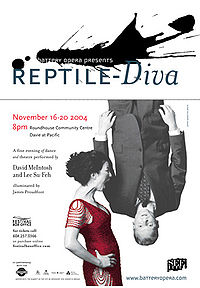 "Battery opera was founded in 1995 by dancer/choreographer Lee Su-Feh and writer/singer David McIntosh.

The work of battery opera interrogates the contemporary body as a site of intersecting and displaced cultures, histories and habits. Underlying the practice of battery opera is a dynamic dialogue and mutual attraction between opposing tensions, an exchange that is sensitive to the nuances of power and influence in the socio-political history we have inherited. Inherent in this dialogue is a search for language that both embraces and frees us from the assumptions of traditional performance structures.

battery opera celebrates the power of the human body to transform space, time and perception; a body that is at once fragile and powerful; a body that breathes, speaks, sings, thinks, moves, dances.

why battery? because it's small, practical yet contains within it the polarities of positive and negative, male and female, yin and yang.

why opera? because it's big, impractical and contains within it the polarities of life and death, love and fear, hope and despair."[1]

"Lee Su-Feh is Artistic Director of battery opera. How this happened involved: Childrens’ Theatre with Janet Pillai, traditional Malay and contemporary dance with Marion D’Cruz in Malaysia, contemporary dance with Lari Leong in Paris, contact improvisation with Peter BIngham in Vancouver; and many years of Chinese martial arts with infuriatingly exacting teachers. Before coming to Vancouver in 1988, she lived in Paris, London, Indonesia and Malaysia. She speaks 6 languages badly. In 1998, she won the Prix de Jeune Auteur of the Rencontres Choregraphiques Internationales de Seine-St. Denis for her work Gecko Eats Fly. In theatre, Su-Feh has worked as a choreographer with directors such as Marc Diamond, Donna Spencer and most recently DD Kugler and Steven Hill. She has been nominated twice for a Jessie Award. In 1995, she co-founded battery opera with David McIntosh with whom she has been collaborating ever since she saw him lying, bleeding, in Kota Baru in 1985."[4]

She also writes a blog on BlogSpot. [5]

"David McIntosh is a writer, singer, and the artistic producer of battery opera.

In 1995 he co-founded battery opera with Lee Su-Feh, whom he began collaborating with shortly after he was run over while on his bicycle somewhere between Kuantan and Kota Baru."[6]

David also writes a blog for battery opera on BlogSpot. [7]