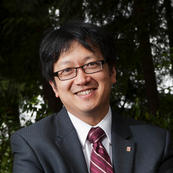 Henry Yu is involved in the collaborative effort to reimagine the history of Vancouver and of British Columbia through the concept of "Pacific Canada," a perspective that focuses on how migrants from Asia, Europe, and other parts of the Americas engaged with each other and with First Nations peoples historically. Read "Our Own Not-So-Quiet Revolution" and Prof. Yu's essay "Global Migrants and the New Pacific Canada," written for the 25th Anniversary of the Asia Pacific Foundation. Also visit Henry Yu's blog "Past Present" at http://henryyu.blogspot.com. Prof. Yu is currently the Principal of St. John's Graduate College, UBC's international graduate college, and served as its Associate Principal from 2005-2009.

Prof. Yu is also the Director of the Initiative for Student Teaching and Research in Chinese Canadian Studies (INSTRCC), the first stage of a long term commitment at UBC to the study of trans-Pacific migrations and the long history of interactions between Asian and European migrants and First Nations peoples in Pacific Canada. Please visit http://www.instrcc.arts.ubc.ca for more information. Watch a series of films entitled "Eating Global Vancouver" that were made by students working with professional film maker Karin Lee at http://www.youtube.com/instrcc.

Prof. Yu is committed to expanding the engagement between academic research and the communities which the university serves. He is the Project Lead for a $1.17 million project entitled "Chinese Canadian Stories: Uncommon Histories from a Common Past" (chinesecanadian.ubc.ca) which will create a one-stop web portal for the the reinterpretation of Canadian history through the lens of Chinese Canadians. Receiving $950,000 from the Community Historical Recognition Program of the Canadian Federal government, this project aims to gather the ignored histories of one of the "founding peoples" of Canada and to use the latest in new media technologies to present a new understanding of our common history. As part of the project, Prof. Yu's research team is collaborating with the Spatial History Lab at Stanford University in creating state of the art visualizations of historical data. See them at the Stanford website.

Prof. Yu also currently serves as a Co-Chair, along with Susan Tatoosh of the Vancouver Aboriginal Friendship Center and Councillor Wade Grant of the Musqueam Nation, of the City of Vancouver's "Dialogues Between First Nations, Urban Aboriginal, and Immigrant Communities in Vancouver," a unique and important series of projects that aims to promote engagements between communities that are often considered separately.

In 2005, Prof. Yu and Teaching Assistant Jennifer Lau took students from classes at UBC and UCLA in a unique six week summer field course comparing Asian migration and its effects on Vancouver and Los Angeles. Entitled "Eating Our Way from Vancouver to LA," the popular course focused on food and restaurants as a way of understanding cultural change. In the summer of 2007, Prof. Yu took an even larger group of UBC students on a joint field course with University Scholar Program students from the National University of Singapore. Entitled "Eating Our Way Across Southeast Asia," the 20 UBC and NUS students, along with TA Jennifer Lau and fellow UBC Professor emeritus Graham Johnson, literally ate their way through Hong Kong, Guangzhou, Singapore, Malacca, and Kuala Lumpur. The summers of 2009 and 2010 saw students from UBC and from NUS each spending two weeks in Vancouver and Singapore in group research projects comparing the two cities, and of course sampling the other city's cuisine. Watch a film made by the students examining how the two cities have dealt with their historic "Chinatown" districts.

A Founding Board Member of the Chinese Canadian Historical Society of British Columbia http://www.cchsbc.ca, Prof. Yu continues to serve on the Board of Directors and actively engages his UBC students in community history projects through CCHSBC. His essays are featured in two of the CCHSBC's books, Tracing Memories, Finding Routes (2006) and Eating Stories: A Chinese Canadian and Aboriginal Potluck (2007), as well as in the introduction "1788" for CCHSBC's documentary "Bamboo and Cedar" about engagements between Chinese Canadian and First Nations historically.

Prof. Yu and Prof. Peter Ward were co-investigators in a SSHRC funded project involving the creation of a digital database of the approximately 96,000 Chinese Canadians who paid the discriminatory Head Tax between 1885-1923. This project involved student research assistants Jason Chan, Mary Chan, Denise Wong, and PhD student Feng Zhang. Put online in 2008, this database enables Chinese Canadians whose ancestors were Head Tax payers to search digitally for their records.

Watch a CBC news story with Prof. Yu explaining the Chinese Head Tax Digitization Project. Read more about the Chinese Head Tax Digitization project in a story by Lisa Stedman of the Vancouver Courier from September 29, 2006 and an essay written by Prof. Yu for Library Archives Canada's online collection on Chinese Canadian history. See one of the results of a Geographic Information Systems project undertaken by Edith Tam, Maria Ho, and Jeremy Alexander students of Prof. Sally Hermansen of UBC Geography. Prof. Hermansen's students mapped the destinations of Chinese Head Tax Payers between 1910 and 1923.

During 2007, Yu was the Co-Chair of the Anniversaries of Change Steering Committee, representing a network of community and cultural organizations, educational institutions, and labour organizations coming together to mark a series of important anniversaries in the history of Vancouver and Canada. After a year-long series of events, the Anniversaries of Change partnered with the British Columbia Teachers Federation to obtain a grant from the Law Foundation of British Columbia to create teaching resources for B.C. high schools (see the intro to the "Pivotal Voices" resource from The Critical Thinking Consortium.

Yu is currently writing a book entitled Pacific Canada, another book entitled How Tiger Woods Lost His Stripes, as well as a third book project which examines the history of Chinese migration in the Pacific world.

In May 2005, Yu was chosen by the History New Network as one of its "Top Young Historians." Read about it here.

In September 2007, Prof. Yu was featured in the Georgia Straight's annual "Best of Vancouver" Issue as one of the city's "Bright Lights"

In October 2007, Prof. Yu was honoured as an "Unsung Hero" in a "Spotlight on Leadership" event sponsored by the North American Association of Asian Professionals (NAAAP) held at the CBC in Vancouver. Prof. Yu lives in Vancouver with his three children and his wife, Ai Mizuta.