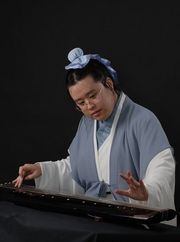 Juni L. Yeung, BA(Hons.)(Toronto), MA(CUHK), Chinese name Yang Junli, courtesy name Xueting, is the founder of the Toronto Guqin Society, and is one of the founding members of the Toronto Hanfu movement in 2006, and has been dedicated to the teaching and linking of the guqin and its players since 2005.

Juni is a PhD candidate at the Department of History, University of Toronto studying the phenomenon of Han Chinese Clothing Revival Movement. She has since 2008 posted research essays and articles through the Toronto Guqin Society's website, and is currently one of the most authoritative English sources on the subject matter online.

She also co-founded the Toronto Association for the Revival of Hanfu in 2006 with Yuen-Cheung Chin and Jie Yan, the earliest hanfu promotion and advocacy group in Canada and outside of China.

Taking an interest in Chinese culture from computer games and books at a young age, she is deeply immersed in the arts of Guqin, Go, brush calligraphy, and is an amateur to Chinese tea culture and divination using the Yijing (I Ching). Juni's musical background originated from the piano and woodwinds, but had a fascination for learning the Guqin since Grade 2. She started the guqin through self-study in 2003, where she mastered the instrument without a teacher, and made a public debut in the 2005 Kiwanis Music Festival's Non-Western plucked strings open section, where she took gold prize. She has performed locally and worldwide, including Scotiabank’s Nuit Blanche 2007 as a panel display with Yvonne Ng and Tiger Princess Dance Projects.

After the establishment of University of Toronto Guqin Association, she visited players of the Fanchuan, Mei’an, and Sichuan schools, particularly receiving instruction by Zeng Chengwei of the Sichuan Music Conservatory in 2009. In the following year, she published Standards of the Guqin under TQS.

In her personal time, she researches Ming Dynasty guqin manuscripts in addition to teaching the guqin. Other hobbies include listening to orchestral, chamber and choral music, cooking, creative writing, and occasionally, acrylic painting. Her culinary preferences are Huaiyang Chinese and Emilia-Romagna Italian, and takes a liking to Italian prosecco and spirits.

Other information based on profile from concert in Midday Mosaics @ Hart House in February 2009.