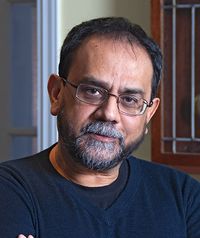 Playwright and engineer, Rana Bose lives in Montreal. His plays have been staged in Canada, the United States, and India.

Multilingual Writer, Playwright, Poet, and Dramaturge, with over twenty years of involvement in writing, theatre and production work on stage. Rana Bose was born in Kolkata, India and has lived in North America for over thirty five years His first novel, with the assistance of a Canada Council Writers Grant, was published by Vehicule Press, Montreal, (Recovering Rude).

Ten of his plays, all of which have been published, have been performed in Montreal, Toronto, Vancouver, Guelph and in India. He has written over 100 articles, reviews, short stories and critical essays, that have been published in various publications and his works have been broadcast and reviewed on CBC, as well as in the Montreal Gazette, the Montreal Mirror, The Montreal Hour, the Globe and Mail, the Ottawa Citizen as well as in several digital Magazines. The Fourth Canvas is his second novel, was published by TSAR, Toronto in the fall of 2008. His third novel, Fog, is due for publication in 2013. Rana is currently writing a graphic novel and a short one-hour performance piece called Tribes. Rana frequently performs at the Yellow Door and the Fairmont Arts Cafe in Montreal.

He is also an editor with theatre troupe and webzine, Serai.

This article based on content from http://thefourthcanvas.com/.
Retrieved from "https://www.asiancanadianwiki.org/mw/index.php?title=Rana_Bose&oldid=13766"
Categories: