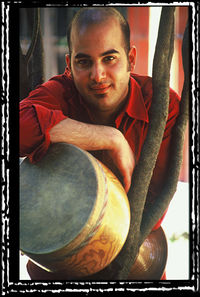 Ziya Tabassian started playing the tombak (a Persian percussion) at the age of 11. From 1994 to 2001 he studied western classical percussion with Julien Grégoire in Montreal, and has completed a Bachelor degree in percussion interpretation at the Université de Montréal. During winter 2002, Ziya went back to Iran for tombak training with M. Bahman Rajabi, and in 2003, he completed a residency at the Banff Centre for the arts, where he explored the contemporary music on the Persian percussions.

He has received several grants from the Canada Council for the Arts and the Conseil des arts et des lettres du Québec. He already realised many CDs in duo with his brother, Kiya Tabassian and Constantinople on the ATMA label, and recorded for many other productions, such with the Kronos Quartet, the Nouvel Ensemble Moderne and Lo'Jo. He is frequently heard on CBC Radio and Radio-Canada. He just released his solo CD called TOMBAK, on Ambiances Magnétiques label.

This article based on content from http://www.ziyatabassian.com/en/biography.htm.
Retrieved from "https://www.asiancanadianwiki.org/mw/index.php?title=Ziya_Tabassian&oldid=12945"
Categories: